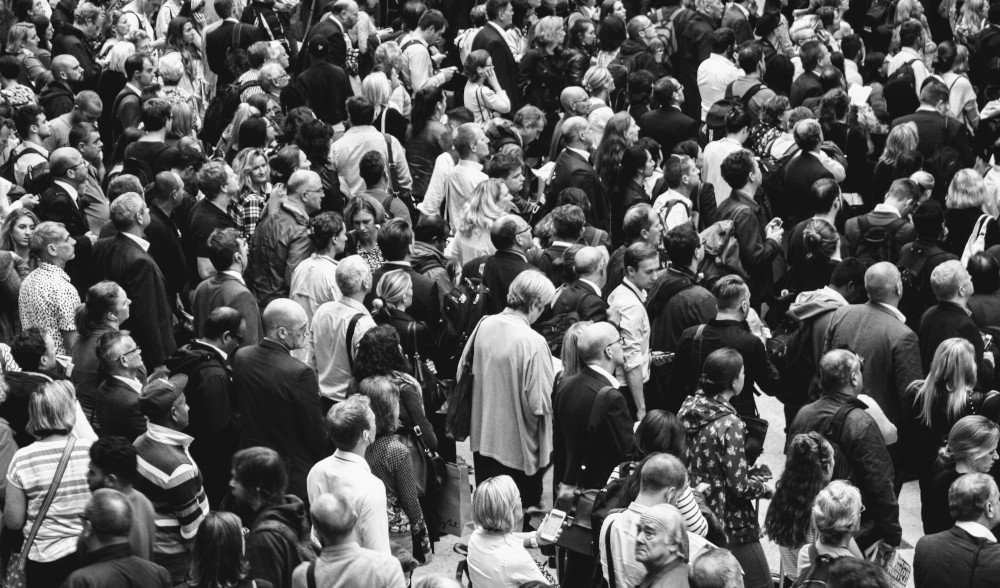 I thought I’d read it wrong when I saw this heading in a recent posting from Kaiser Health News (KHN). I looked again and saw that the full title of the well-researched article was as follows:

“100 Million People in America Are Saddled with Health Care Debt.”

This is slightly less than one-third the estimated population in 2022. This 100 million includes 41% of adults “beset by a health care system that is systematically pushing patients into debt on a mass scale.” Much of the debt is buried in credit card balances, loans from family, or payment plans to hospitals and other medical providers.  According to the article, KHN and NPR reporters conducted hundreds of interviews with patients, physicians, health industry leaders, consumer advocates, and researchers. This plus a nationwide poll by KFF for the project should be enough authority to satisfy the most doubting of Thomases.

In a word, this is not a bug but a feature of what we are calling a “uniquely American” health care system. 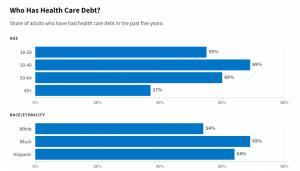 What did people do to try to pay off their debt? 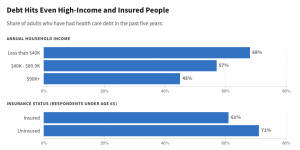 So, who has this kind of money sitting around to pay out of pocket before the deductible is met? And now we have the price of gas, food, and housing prices soaring, and a full-on recession on the horizon—that will cut jobs and create more unemployment.

In order to avoid the dreaded “socialism” of Medicare for All, our representatives in congress have ditched any semblance of responsibility to say nothing of compassion for their constituents (who – btw -pay their salary and benefits and retirement and special medical services) they are elected to serve. Self- and corporate serve are more accurate.

Blue and Red Do Have Something in Common. They’ve Both Been Ripped Off, Repeatedly. This is the title of Matt Taibbi’s posting on June 22, 2022. He begins a detailed analysis of what’s happening with this quote from the great George Carlin:  “Good, honest, hardworking people, white collar, blue collar. Doesn’t matter what color shirt you have on… People of modest means continue to elect these rich _______ who don’t give a ____ about them. They don’t give a ____ about you…It’s called the American dream because you have to be asleep to believe it.”

Taibbi ends his latest posting with this: “Really, we don’t live in two Americas but one, whose obvious problem is that too many of its citizens have too much in common, having been repeatedly ripped off, in the same types of scams, by the same people, for decades. Sooner or later, the public will figure it out, and come running toward Washington all at once, pitchforks drawn.”

I only I hope I live long enough to see that day and am still able to wield a pitchfork (well, maybe a trowel at my age, but you get the point).

If you want to read the full article originally published at Kaiser Health News go to: