I’ve received many labels through the years, some unwanted: ”Best Body” in the ninth grade and ex-wife twice. In mid-life I was told by a mailperson that I held the local record for the most forwarding labels of someone not fleeing the law—three. And most recently I was given one I treasure—earned in a class developing a forthcoming memoir—“Most likely to start a forgiveness movement.”

If you grow up in the Midwest and have never seen either coast, you are stunned by the vastness of the ocean and surprised that not everyone puts catsup on their eggs.

I lived in and departed from “one of the M states.” And, having been born on Easter I left the nickname of Bunny behind. Growing up I lived for the bookmobile to come to our neighborhood and to be as brave and adventuresome as Caddie Woodlawn—my idol. Instead, I became the keeper of family secrets. In order to cope, I became a keen observer, filing my stories away—both good and bad—for later.

Living in an all-white village outside of St. Louis, my first exposure to injustice and racism occurred on a visit to my father’s relatives in Mississippi. I learned about slavery, “whites only” signs, and fell in love with the black maid, Ophelia.

John Ciardi sums up my adolescence and maybe yours: “You don’t have to suffer to be a poet; adolescence is enough suffering for anyone.” At nineteen I left college with one short-term goal and several long-term regrets. While I had planned on becoming a writer, the era demanded marriage, and a long-delayed return to college and graduate school.

Being a wife and then a mother in the 1960s without academic cred, a war raging, and the women’s movement stirring up my small world, I became a crucible of conflict. There had to be more to my life and a place for me outside the home. When I was suddenly forced to make my own way after a divorce, the search began. I tried, failed, and tried again while earning the reputation with friends of being a bit of a smart-ass who kept her sense of humor intact.

Since I had never asked myself what I wanted, I had my first answer working in a remote village in Kenya earning credit toward a master’s degree. I returned a changed, unsettled woman who had finally come-of-age.

My goal thereafter was to find the possible in the imagined impossible. And, to be a person who encourages others to do the same, helping my mother come-of-age in her mid-70s. After more than sixty moves during my life, in 2000 I moved to the Pacific Northwest and am happy to call Bellingham, Washington home.

In the past I have written extensively for corporate clients, trade magazines, worked under a Robert Wood Johnson Foundation grant, non-profit organizations as a grant writer, and for local and alternative newspapers on a variety of topics.

In 2009 I indie published a memoir, Getting to Home: Sojourn in a Perfect House, about the process of building a house as a single woman. Other publications followed: “How Many Writing Books Does It Take?” appeared in the 2010 debut issue of Line Zero, a literary-arts magazine; a personal essay, “Good Vibrations,” was published in Full Grown People, an online magazine in 2015. “Thank you, Grace Paley” was published in Memory into Memoir: An Anthology in 2016; “Tis the Season” in the Red Wheelbarrow Writers’ anthology So Much Depends Upon…” in 2018; “In the Red Kitchen” in True Stories: The Narrative Project in 2019; and “It Isn’t Watching” appeared in For the Love of Orcas, an anthology dedicated to saving our endangered orcas.

Literary membership organizations include: from 2007 – 2015 co-chair of Field’s End (a program of the Bainbridge Public Library—founded by David Guterson) dedicated to fostering the art and craft of local writers, the Red Wheelbarrow Writers serving Whatcom County writers, located in Bellingham, Washington, and the National Association of Memoir Writers. 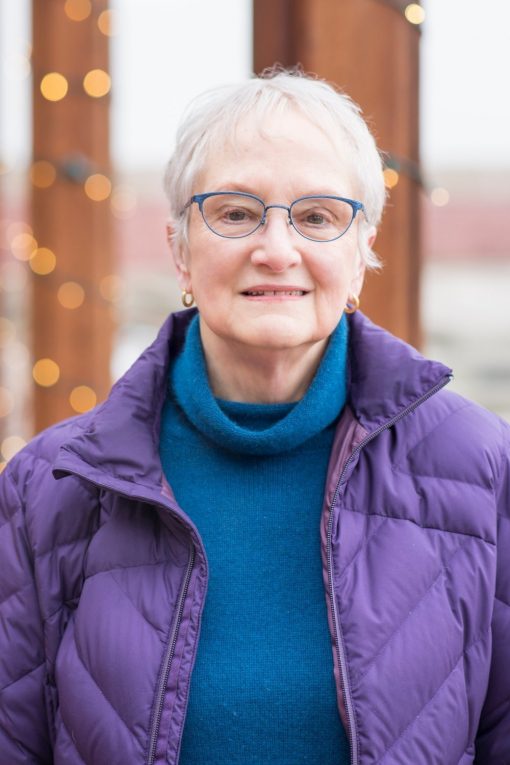 This world is full of conflicts and full of things that cannot be reconciled. But there are moments when we can . . .reconcile and embrace the whole mess, and that’s what I mean by ‘Hallelujah’