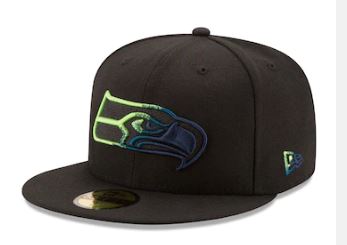 My daughter, Cara, and I live in a large, older apartment complex in the Pacific Northwest with the standard amenities.

Our favorite is the swimming pool, but as we like to think of it—where the mallards hang out after the summer season.

Our apartment is on the second floor, nothing fancy except the view out the back where we face a lovely, wooded area, a link to the Interurban Trail, birds at our feeders, and the sound of Padden Creek rushing after a hard rain.

Regrettably, modern apartment living is anonymous unless you happen to bump into someone and can make a connection. This rarely happens since everyone has their life and goes about their business. The pandemic restrictions created even more isolation despite sharing common walls—four units to a building.

Our bedroom windows overlook the parking lot of several notable vehicles and it’s mildly entertaining to have a private language for a few of their owners. One gent, with a flaming red classic car, who always wears a porkpie hat, we’ve dubbed Indiana Jones; another slender dude with a humungous SUV we named Little Big Man (he had to hoist himself up to get into the beast). And The Man of Many Vehicles who always smiles, wears a baseball cap, has two parking spaces and a classic truck in full-on restoration in one of the garages.

I mention this because one bright Saturday morning, perfect for a long sunny walk, we hopped into the car, put on our seat belts, and were ready to go. When Cara started the car, what came out was a distinct flutter, flutter. Our hearts sank in unison. Now what?

Cara and I are competent at many things but car mechanics is not among them. We share our faithful 2006 Honda Civic and are grateful for her (Helen’s) 130,000 miles of service. I keep her maintenance up-to-date and Cara can replenish her wiper fluid. That’s about it!

Thus began a parade of possible steps, alternating between we can handle this and mental pictures of Helen being towed away with dollar signs, like a contrail, flowing out of her tailpipe. Then I remembered the “many vehicles man” who lives below us in a ground-floor unit. We’d seen him tinkering with his VW van on several occasions. We’ve always said hello but that was it.

“What if we wrote a note, explained the situation, limited our request for him to simply take a listen, and taped it on his door. Just to see what he thinks?” We both admitted that asking for help wasn’t one of our strong suits and tried to give him an out if he was too busy. Cara wrote the note, identifying who we were—names, our request, and how to reach us by text. And then we waited.

Later that morning she received a welcomed reply. “I’m downstairs and happy to listen.”

The absolute second she turned the ignition key, Bill (we now knew his name) said, “Battery. You have a dead battery.” His instant diagnosis made me weak in the knees. Not a starter, not a cracked engine, not RIP of Helen. There was instant relief quickly followed by next steps—could we get a jump, who would be open on Labor Day weekend, and more.

“I’m going right by several auto stores and could get a new battery for you,” Bill said. “I can take this poor old thing out and buy the replacement. Easy enough to do.”

The gloom of the morning lifted. We offered to give him one of our credit cards. “No, I’ll just bring you the receipt and you can pay me.” He texted us from the auto store later in the day to confirm Helen’s details.

On Labor Day morning we received another text. “I’m downstairs. You can give it a go.” 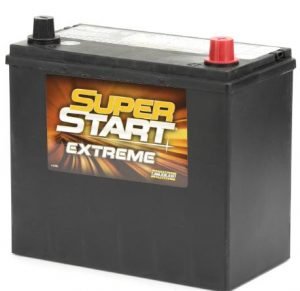 Our Honda turned over like a teenager, Bill appreciatively took the cash we gave him to cover the cost, and with a smile again declined our offer to pay him more for his time. He seemed kind of shy about making two women so happy. I noticed that we three were standing in the tender glow that acts of kindness creates.

We wanted to thank him in some way and decided on a gift certificate to our favorite Italian restaurant. We wrote him a Thank You note for his time and his help, and taped it to his door. Buon Appetito.

A few days later, we found this note under Helen’s windshield wiper, written on the back of our Thank You notecard. I love a thrifty person. Don’t you? 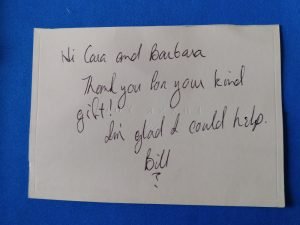